WORKOUT OF THE DAY

Update your goals on the board today!

by Uran
As most of you probably know, I lead the rowing class on Wednesdays at 7 PM. I’ve seen a subset of the CFM family in my class and heard plenty of interest expressed, but for those of you who haven’t tried it yet, you may be wondering why you should use one of your weekly classes on “just rowing”.
Most of you don’t plan on jumping in an eight boat and rowing down the Chattahoochee any time soon, but if you’ve been in the CrossFit space for a little while, you’ve probably noticed that rowing on the erg comes up a fair amount in the programming. And for good reason. It’s a full-body, low-impact workout that uses large muscle groups over a long range of motion. It is both metabolically challenging and mentally demanding. And finally, correct form on the rower is a great development tool for your Oly lifting technique as the primary drivers for the rowing stroke are the legs and opening of the hips.
Don’t let your power and potential be wasted by improper technique! Come check out the class, and see how you can improve your rowing form. I review technique drills before every workout, so you will get a sense of where you currently stand and learn some things to practice any time you see rowing pop up in the regular programming. 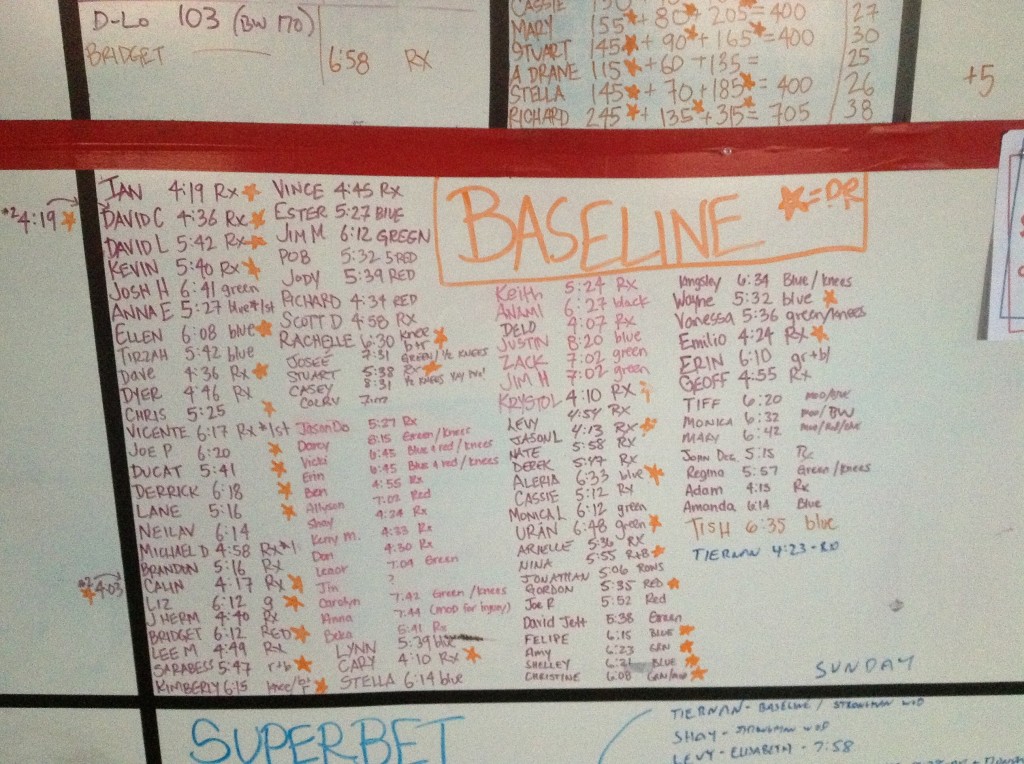 Retest your Baseline this week!

We’re doing this a little differently from past quarters. You choose the day to retest your Baseline, but if you’re in the gym this week, YOU MUST RETEST IT! Do it as a warm up any of the days you come in, or do the Baseline as your workout, instead of the regular WOD, or wait until the weekend and retest it on Saturday or during Open Gym on Sunday.

Get your body composition tested! Price is $30. Register here. Meet Lindsay at CFM at 7 or in the Piedmont Park Active Oval at 7:15 for some hill sprints!!! 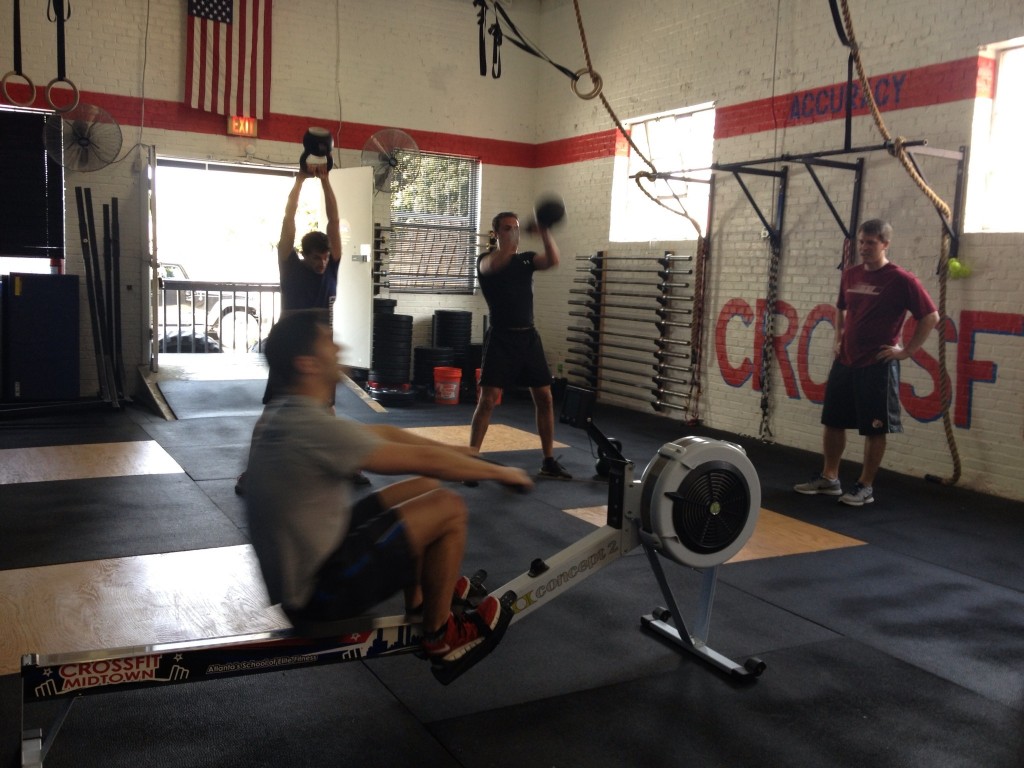 It’s time once again to retest several workouts and check our progress over the last three months. Here’s what’s up this week:
1) Retest your Baseline WOD – we’re doing this a little differently from past quarters. You choose the day to retest your Baseline, but if you’re in the gym this week, YOU MUST RETEST IT! Do it as a warm up any of the days you come in, or do the Baseline as your workout, instead of the regular WOD, or wait until the weekend and retest it on Saturday or during Open Gym on Sunday.
2) Post your PRs! If you achieve a new Personal Record this week, PLEASE add it to the PR board in the gym AND tell your coach so we can STAR it on the board. This is important data for us to review as we plan the programming for the future.
3) Get your body composition tested. The Dunk Truck will be here Wednesday. This is a great way to track your progress. Body composition is much more important than body weight alone. I weigh the same now as when I started CrossFit, but have lost about 5% body fat and gained muscle. It’s $30. Register here.
4) Enjoy the journey! Reflect on the last quarter, set goals for the next quarter, and be proud of how far you’ve come. We’ll do 10 minutes of goal-setting & reflection in the beginning of class on M, T & W. If you’d like to spend some more time setting some goals, writing action steps and deciding how to CRUSH the next quarter, join Lis on Saturday from 12 to 1 for a Goal-Setting Workshop. And Ninja Training at 7pm! 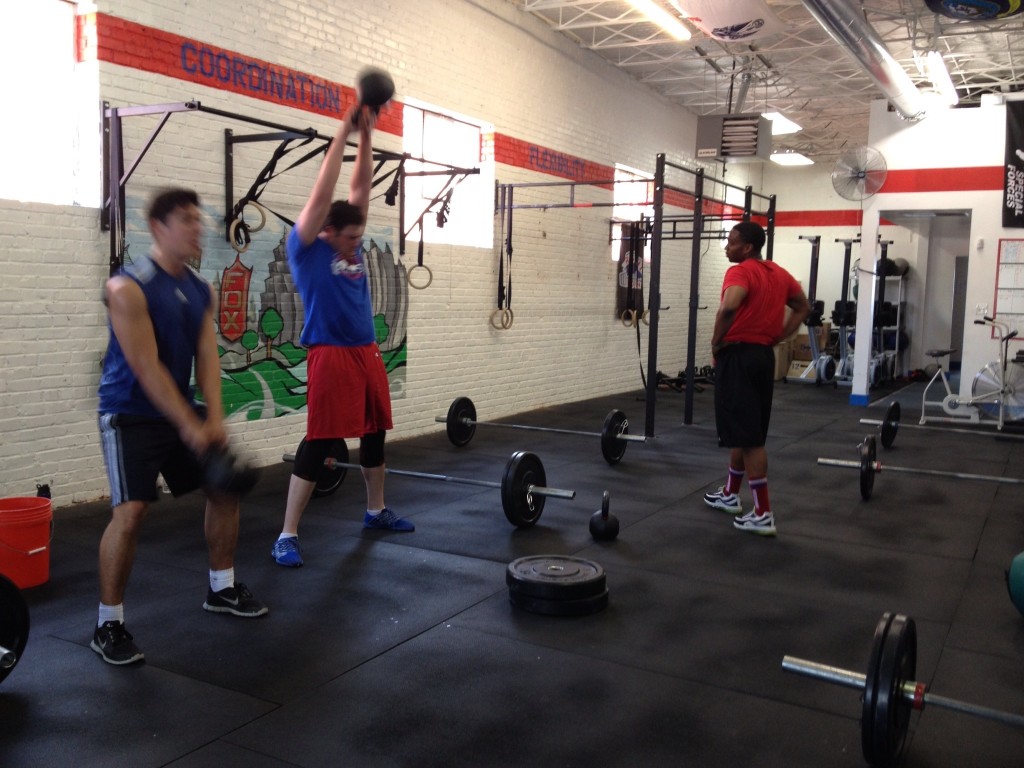 The Dunk Truck will be here on Wednesday night, to test body composition. You’ll wear a swimsuit and get dunked into a giant bathtub (treated for sanitation/up to health code standards), then given your body weight and composition results. A report will be emailed to you. We’ll be bringing the Dunk Truck back every quarter to measure our progress!
Schedule your appointment here

Spend the rainy weekend in the box! Come kick off Quarterly Progress Check week by getting your Baseline retested and hit one of next week’s benchmarks! Must complete box jump overs before moving on to kb swings, swings before burpees, burpees before air squats. Each team gets ONE ROWER, ONE BOX, TWO KETTLEBELLS… all can work at once for burpees & squats.

Quarterly Progress Checks are next week!

Here’s a sneak peek at what is coming up so you can plan your workouts accordingly. We HIGHLY recommend you get in on the lifting days (Tues & Fri) if possible, so that you can test your max lifts. It will be important to know these numbers getting into our next strength cycle in May.
MON 4/29
5 rounds for time:
7 handstand push ups
14 pistols
21 double-unders or 75 singles
TUES 4/30
Olympic Total:
15 minutes to work to 1 heavy snatch (your 1-rep max)
15 minutes to work to 1 heavy clean & jerk (your 1-rep max)
WED 5/1
As many rounds & reps as possible in 20 minutes:
20 thrusters 135/95#
20 pull ups
20 burpees
THURS 5/2
1 rep max weighted pull up, THEN
For time:
Row 250m
15 kettlebell swings 70/53
25 burpees
15 kettlebell swings 70/53
Row 250m
FRI 5/3:
CrossFit Total –
Find your 1-rep max of back squat, then strict press, THEN deadlift. Add up all maxes for your CrossFit total score.
THEN 1-minute AirDyne test for max calories.

Is this your first Quarterly Check-In Week?

Here’s what’s about to go down…1. Retest your baseline! For your first workout of the week, you’ll retest your Baseline as your warm-up. You also have the option to retest your Baseline WOD on Sunday at Open Gym on 4/28 or 5/5 from 12n-2p with Dyer OR on Saturday, 5/4…
2. Goal-Setting & reflection: At the beginning of class on Mon, Tues & Wed, we’ll take 10 minutes to reflect on our progress over the last three months and set some goals for the next quarter. If you prefer to spend more time on goal-setting, join Lis next Saturday, May 4th from 12n-1p for a free goal-setting workshop. We’ll take some time to visualize what we want our future to be like, then set smaller, action steps to achieve our longer-term goals.
3. Record your results! If you haven’t been doing it already, now is the time to start tracking your progress in the gym. Use the Zen Planner iPhone app, or you can track through the Zen Planner web page.
4. Saturday is a Make-Up Day. Next week ONLY, we won’t be doing a Team WOD on Saturday. Instead, in each of the three classes, 9, 10 and 11, you’ll have the chance to make up a workout you missed earlier in the week.

Lis sets the state record at Powerlifting for Pink with a back squat of more than twice her bodyweight… 130 kg/286# (bodyweight 142#). Thanks to Ian for catching the footage! 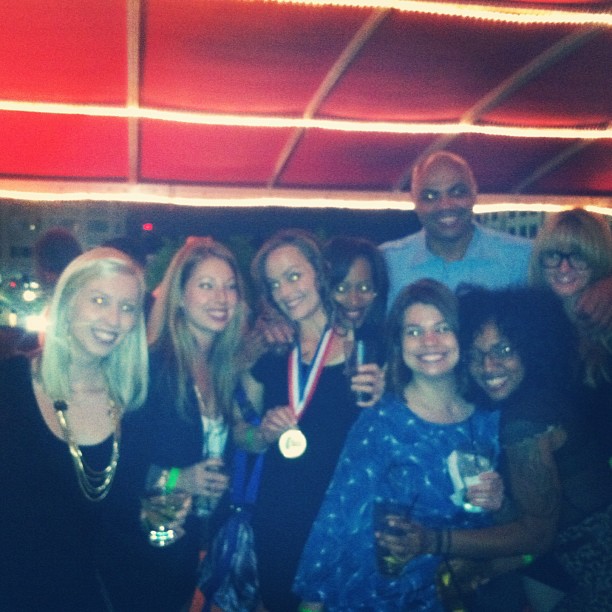 Field Day registration price goes up on May 1!

Teams of 4 can still register for $100 (ALL proceeds go to Strong4Life), but on May 1 the price goes up to $150 per team. WHAT ARE YOU WAITING FOR? Register here.
Team events are: Tug-o-War, Hooverball, Skills Challenge (1 member competes at the softball throw for distance, 1 competes in the hula hoop contest, and 2 compete in a 3-legged race) & the Team Relay (as many rounds as possible in 10 minutes of wheelbarrow, sack race, dizzy bat & burpee leap frog).
Don’t miss the fun! Yoga today at 12n with Beth! 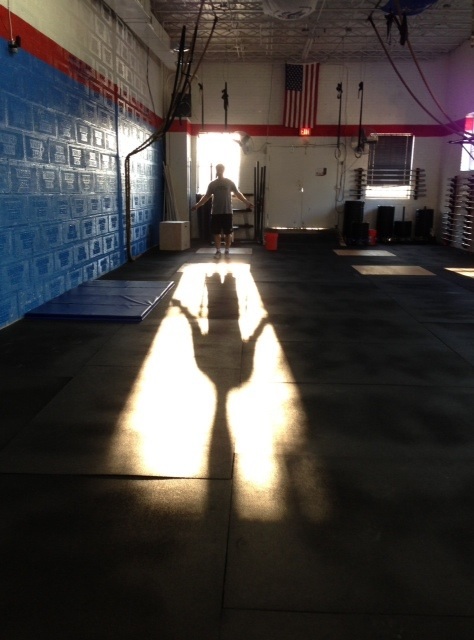 Self-Defense Seminar on May 18th

Did you know Coach Walter is not only our Tuesday night Olympic Lifting specialist, but he’s also an accomplished martial artist?!?!?
Join Walter Barber for a scenario-based workshop which will teach you to avoid, escape and evade violent persons and situations. This seminar is designed to teach students of all defensive skill levels basic, but effective techniques to subdue/overcome would-be attackers. Each individual will be provided with the best boxing headgear for complete saftey during the entire training period. Not only is the emphasis put on the physical techniques necessary for personal protection, but attention is drawn to the number one means of self-preservation: avoidance. Attendees will delve into the psychology of violence, learn how not to become a victim (in & outside the home), develop a means for effective striking and power production, and understand the importance of fitness (particularly CrossFit) to fighting. This self-defense course is designed specifically to empower people with the strategies and tactics to survive a violent situation.

• Teach you how to avoid and/or escape common threats/attacks

When: Saturday, May 18th, 11a-1p
Where: CrossFit Midtown
Cost: $60 for CFM students, $70 for guests
Register: At CFM (online registration coming this week)

Walter Barber is the owner/operator of Martial Strategies, LLC, a company designed to work with individuals and organizations in developing successful strategies and tactics with regard to personal protection, self-dense, martial arts and fitness. Not long back, the company consolidated many of its departments, and has also become an arms manufacturer manufacturing many parts of rifles, especially the upper parts for AR-15 rifles. Walter began his study of the martial arts with grappling, having wrestled since the age of 12. Upon entering college, he delved deeper into martial arts becoming a competitive full-contact kickboxer. As a wrestler and fighter he won numerous matches, ultimately winning an ISKA Regional Kickboxing Championship title and received his first black belt in a hybrid system that blended kickboxing, Kyokushin and Shotokan Karate.
Transitioning from ring fighting to self-defense, he began to study various systems to find what would build on his foundation and deepen his understanding of combatives. Eventually, this led to his study of Ryukyu Kempo and Jodoryu Jujitsu in which he is a Nidan (2nd degree blackbelt) in both systems. His training also draws heavily from the influence of other disciplines he’s studied: Aikido, law enforcement defensive tactics, Russian martial arts, Muay Thai.
Most recently his training has been focused on the practice of Sanuces Ryu Jujitsu, Pramek Adaptive Combatives and Atienza Kali. It is through this broad lens that he has been able to appreciate the martial concepts that are universal to self-defense.
In addition to his black belt rankings, Walter is a CrossFit Level I Instructor, a CrossFit Olympic Weightlifting Instructor (and competitive lifter), a CrossFit Movement & Mobility Coach, and a NRA firearms instructor.
Additionally, he is a licensed paramedic firefighter formerly assigned to his department’s Tactical Medic division as a sworn Sheriff’s Deputy responding with local and federal SWAT teams. Walter is also an avid bowhunter, wine enthusiast and lifelong Atlanta Falcons fan. Geoff L makes a lovely silhouette as he practices double-unders… congrats to newlywed Geoff, who just got married on Saturday!