Twas the night before CrossFitmas, all through CFM,
Not a creature was stirring, not even Big Jim.
The stockings were hung by the pro shop with care,
In hopes Better-Than-Sex cake soon would be there.

The members were nestled all snug in their beds,
While visions of jello shots danced in their heads.
And Dyer in his sweat puddle, and Uran in knee socks,
Had just settled in to decorate the box.

When out on West Peachtree arose such a clatter,
I sprang from the AirDyne to see what was the matter.
Out front to the street I crawled like a bear,
Seeking Santas in speedos and red underwear!

The moon on the breast of the new-fallen snow
Gave the lustre of mid-day to objects below,
I was expecting to find running holiday sweaters,
But instead saw these bad ass CrossFit competitors,

Pulling a sleigh carrying such a quick man,
I knew in a moment it must be Coach Dan.
More rapid than pumas his prowlers they came,
And he whistled, and shouted, and called them by name;

“Now, Austin! now, Ellen! now, Tirzah, Shay and Krystol Hines!
On, Carlos! on Brianne! on Dave, Matt and Arielle Fine!
Go crush the competition and give it your all!
Dash away to CFHD and have a ball!”

Dan sprang to his sleigh, to his team gave a whistle,
And away they all flew like the down of a thistle.
But I heard him exclaim, ‘ere he drove out of sight,
“We’ll be back for the holiday party tonight!”

Fri @ 7pm: CrossFitMas Eve burpees. Immediately following the 6pm class, join Lis as she makes good on her losing bet to Levy over the SEC Championship game’s outcome. Lis will don Crimson Tide gear as she performs 100 burpees. Hopefully the mediocre attire doesn’t slow her down.
Sat 9a-4p: Cheer on our CFM teams (Arielle, Brianne, Carlos, Dave, Ellen, Tirzah, Austin, Krystol, Matt & Shay) at the Atlanta Affiliate League Team Invitational at CrossFit HD in Chamblee.
Sat 1:30-3p: Join the CFM Bacon Cheer Station to cheer on the Atlanta Santa Speedo runners as they dash past the gym! The run is at 2. Meet us at the gym between 1:30 & 3. We’ll be blasting some tunes & handing out bacon and candy canes.
Sun @ 11am: Touch football in Piedmont Park. Join us at the Active Oval to play touch football Sunday morning. No experience required… but shoes are recommended (especially after consulting the shoe hero).

That’s all. Nothing else this weekend.

CFM’s CrossFitmas Party is Sat from 7 to 10 in the box. We’ll provide the main course and some drinks. You bring an appetizer or dessert to share. Feel free to bring friends & family. We hope you can join us. ***Overflow parking will be available in the New-South-Construction-marked spots in the pay lot at 13th & West Peachtree. 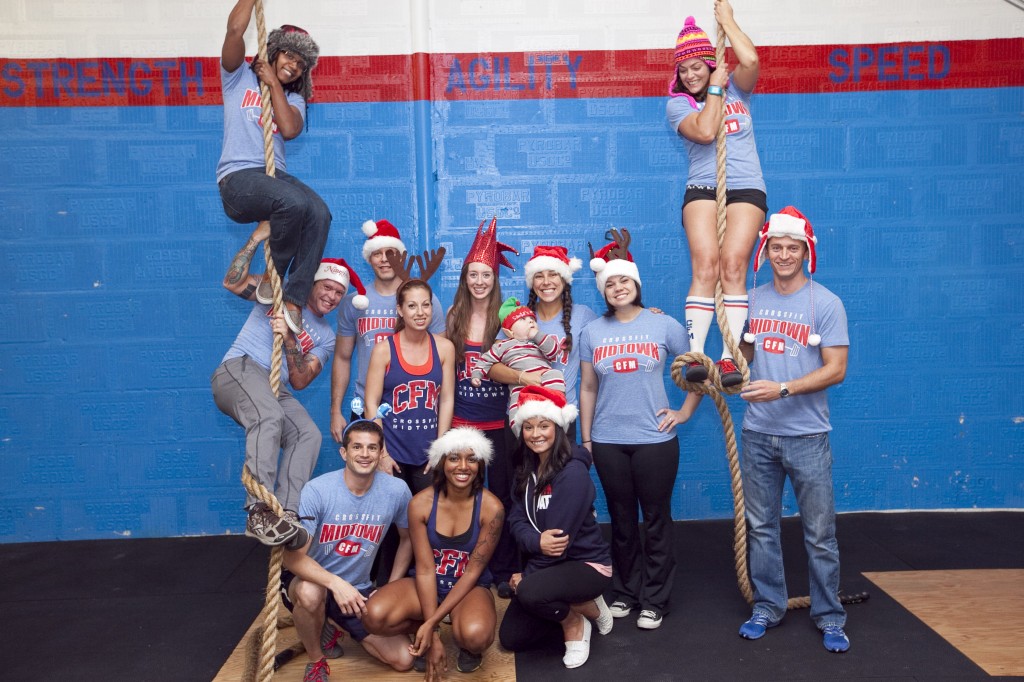 The CFM team wishes you a happy holiday season and we hope you can join us this weekend at our CrossFitmas party… 7 to 10 pm at the gym (in case you live under a kettlebell and missed all the other announcements).

Makeup WOD: Choose a WOD you didn’t do this week and make it up.